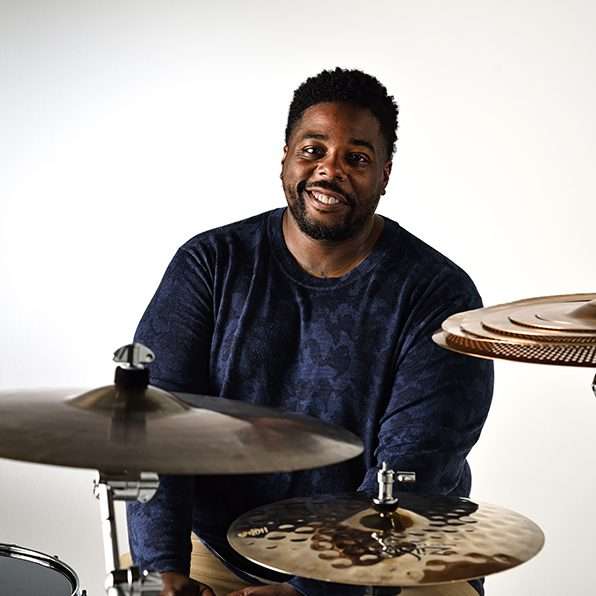 Aaron’s love for music began in a pentecostal church in Washington DC he went to with his parents as an infant. Music was a big part of the religious service. Seeing and listening to the choir and to the backing musicians really struck a chord with little Aaron. Being a part of that environment, playing and expressing himself through music became a natural desire of his. Fortunately for us, among all the musicians in the church band, the drummer was the one that captivated his attention the most.

His development as a musician can be mainly credited to the music he listened and ultimately played along to – which came from his parents personal collection. Gospel artists like The Winans, Commission, The Hawkins, and Hezekiah Walker really opened up his ears to the world of drumming possibilities he had in front of him.

Aaron’s first band experiences were with the church band. And with a band he was a part off during high school. The church band ended up being one of the most important experiences Aaron had as a developing musician. It also helped him secure his first big gig with a local band called the Gideon Band at the age of twenty-three. This also led to his first major break in the summer of 2003.

Gerald Heyward – a big inspiration during his early days but a close friend later on – happened to be listening to some tracks by the Gideon Band in the presence of Valdez Brantley – Usher’s musical director. Valdez got interested in Aaron’s drumming and invited him to audition for Usher’s supporting band, the Funk Rock Orchestra. Aaron, along with hundreds of other drummers, sent a video of him playing along to some Usher songs for the audition process. Valdez, Usher and the rest of the crew ended up selecting Aaron as the drummer for the world tour. Playing with Usher, and getting called for a second run was the sign Aaron needed to commit to his calling and to his dream. Aaron quit his day job and went on tour with Usher. And the rest, as you all know, is history.

Since joining Usher, Aaron has had the opportunity to play around the world and in some of the most popular televised shows in the United States like Saturday Night Live (SNL), and the 2005 Grammy Awards where he performed “Caught Up” with Usher and “Sex Machine” with “The Godfather of Soul” James Brown. Aaron was also nominated for a Grammy award in 2004 as a music producer, for his work on the tracks “Superstar” and “Confessions(Interlude)” from Usher’s 2004 effort “Confessions”.