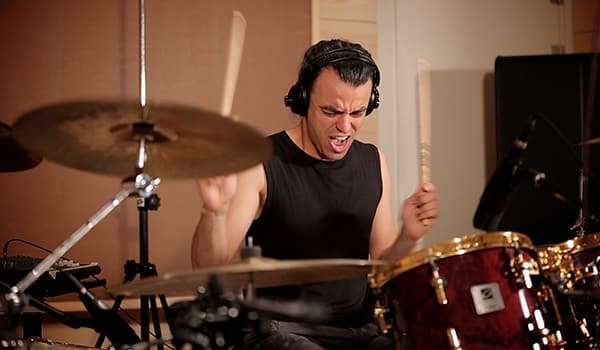 Born in 1976 in Istanbul, Mert started to play drums at the age of 15. He played with the popular rock band ‘Badluck’ when he was 17. In 1996 he played with ‘Işığın Yansıması’ and released the album ‘Birdenbire’ which was awarded the best third rock album of the year by the Cumhuriyet Newspaper.

He toured in France and released a live recording in 1998 with the band called ALIS, a union of French and Turkish musicians. In 2002 he released the ‘ASK’ album with the band called MISTER NO. That year he started to play with Feridun Düzağaç and recorded the album’Orjinal Altyazili’ which was a major top selling CD with 180 soldout shows all around Turkey. During the time he played with Duzagac, Alkaya recorded 5 albums with him. After the release of Aylin Aslim’s “Gulyabani ” album he started playing with her starting with “Fanta Youth Festival 2005” tour. He also works with the guitar virtuoso Cem Koksal in various of his projects featuring legendary rock singer Joe Lynn Turner (Deep Purple – Rainbow) and Mats Leven (Therion – Malmsteen).

Currently Alkaya is the drummer for two progressive and psychedelic bands “Yaya” (neo-prog) and “Nemrud” (psychedelic-space).